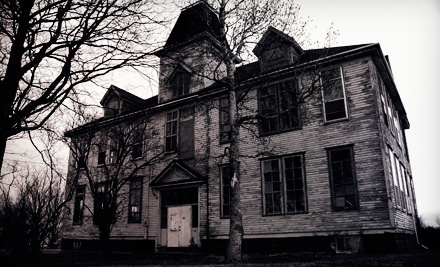 one of my many dream homes..[just me?]

Being as Halloween is inching closer and closer every day, I figured I’d talk about one of my favorite things to do around this time of year: haunted house haunts. I’ve only been to a couple, but I feel like they’re all the same – you walk through a dark hall, while seeing people behind fences with axes/daggers, swinging these weapons just close enough to say it’s in your face, and then you’re done. It’s fairly straight forward. However, looking online for something “new” to do this year, [plus, only everybody is talking about it] I came across a place in San Diego, California [so a definite “not happening”, being in Canada and all..] known only as “McKamey Manor“.  [see their official website here] It claimed to be “not your average house haunt”, and that reservations are a must! I was curious, yet concerned – so naturally, I did what I usually do in that scenario, and looked into it. holy fuck.

run by Russ McKamey, this “house of horrors” boasts a ton of rules, including: [but not limited to] you have to be at least 21 years of age, be in excellent health, sign a legal waiver before you commit, and an average “tour” lasts anywhere from four to seven hours! It’s not just a straight forward “walk through” house haunt either, but more of an intensifying death wish! [quite literally – your own horror film!] Due to the legal waiver, the “actors” are [basically] allowed to do anything they want to you, so long as it isn’t illegal. It’s not expensive to “sign up” either, as it’s just four cans or one bag of dog food; which will be donated to Operation Grayhound is the only admission price. [at least it’s cheap? I mean, I guess?] Obviously, being a haunt based around the horror genre, you can expect a lot of different things to happen to you and your friends, such as some of the following torments:

holding you down and screaming in your face, saying things like “no one’s gonna save you! You’re all alone!”

Locking you inside of a blood coated fridge [clearly this guy looks half-okay: probably just began!]

or even spit [fake] blood on you: all while you’re tied up!

Clearly, there’s a fuck-ton of other things that they do to “guests” of their home, like shoving “food” down your throat, and it’s not like you can move – cause your head is locked in a box! [kinda like the serial killer Hubert Pilčík used to do! I mean, seriously?!]

not even close to how my face would be in this situation..

I know for a fact that I am a horror movie fan, but that’s just it – I’m in the comfort of my own home! Seeing the things that these people go through [willingly, too!] is just mind boggling. I don’t know how people would ever feel safe again, knowing that they’ve experienced this “haunt”! If I still haven’t convinced you of the terror that is McKamey Manor – their official YouTube channel has a bunch of their “quitters” [which generally isn’t allowed] and a ton of their scares.

Check out  2013’s Promo of McKamey Manor below: and realize that this isn’t a game, cause again – holy fuck I’m not cool with this.. [SLIGHTLY NSFW]

But of course the real question I have for you is would you enjoy this “ride” ? or is it way too intense? I just know that in situations like this, I’d probably die a little [or a lot] inside, knowing that comfort isn’t an option. [points to the “actors” for staying in character though!]