Now before anyone jumps at me, I actually mentioned that this post would be late over on Facebook since I knew that I’d be busy up until Christmas. The real problem is the fact that Boxing Day happened to fall on a Friday and I got caught up working til late, plus Christmas. It was a very hectic time, but alas, it’s finally over. [Expect an After-Christmas Post soon] On this edition of Friday Fun Fact, we’re going to talk about one film that has been called: controversial, Satan worshiping – and it’s even gone so far as being called “The Scariest Movie Of All Time” .. that’s right everyone, we’re going to be talking about The [infamous] Exorcist.

I remember the first time I had seen the film, I was mortified by some of the things they were showing on screen [fellow fans know what I’m talking about] such as vomiting on a Priest to even a certain Crucifix! This film did a lot of things, but one real thing was it felt really..fucked up.

The movie follows a movie actress taking up temporary residence in Washington D.C. who has some trouble: the script for the movie she’s filming seems inadequate. Her Ex, who is also happens to be the father of her daughter, Regan, neglects to call the girl on her birthday. Meanwhile, Father Karras, a Priest [and a psychiatrist] is slowly losing his faith; as he’s dealing with a sick mother who needs medical care he hasn’t the money to provide for her. Another Priest, Father Merrin, has just returned from Iraq with senses of evil. These three individuals come together when the sweet and cheerful young Regan turns  into a cursing and violent person . But her “sickness” is beyond the reach of a medical doctor or a psychiatrist – what Regan needs is an Exorcist. [interested yet? read on!]

Actress Mercedes McCambridge, who provided the voice of the demon version of Regan, insisted that she swallow raw eggs and commit to chain smoking to “change” her vocalizations. More so, McCambridge, who had problems with alcohol abuse in the past, wanted to drink loads of whiskey because she claimed that she knew alcohol would distort her voice even more, and an almost crazed state of mind for the character. When she was giving up sobriety [for the sake of the scenes], she demanded that her Priest be on set to counsel her during the process of doing the scene[s]. At William Friedkin‘s [the director] direction, McCambridge was also bound to a chair with pieces of a torn sheet at her neck, arms, wrists, legs and feet .. in order to get a more “realistic sound” of a demon struggling against restraints! McCambridge later said that the experience gave her a horrific rage, while Friedkin has admitted that her performance – as well as the extremes that the actress put herself through to gain authenticity of a “demon voice” – still terrifies him to this day – and suddenly; me too! 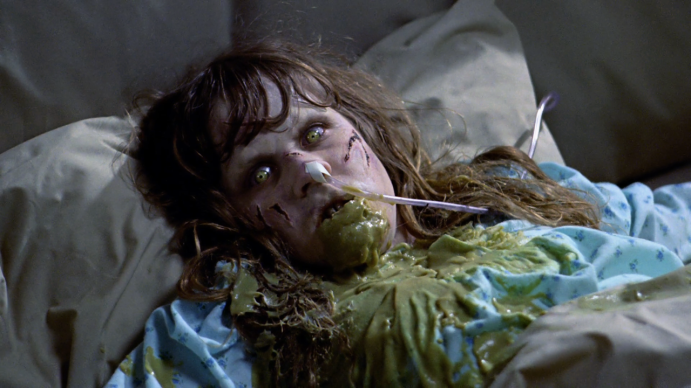 [a face only a mother could love]

Remember this scene? Well did you know that when Regan projectile vomits at Father Karras, it actually only required one take? As it turns out, the vomit was originally intended to hit him in the chest. Instead, the plastic tubing that sprayed the vomit accidentally misfired, resulting in hitting him in the face! [ugh!]  The look of shock and disgust while wiping away the vomit is 100% genuine from Jason Miller [who played Father Karras], and he later admitted in an interview that he was very angered by this mistake. In other interviews, Miller has stated that he had gotten into a major confrontation with Director William Friedkin after Friedkin went to extreme lengths such as firing a gun near his ear to get an “authentic reaction” from him. He angrily told Freidkin that “he is an actor, and that he didn’t need a gun to act surprised or startled. “

For our last piece of trivia, we see the scene above [the Language Lab], there is a sign that says “TASUKETE!“. While some North American viewers may just see this as a sign in a language lab: it’s actually the Japanese term for “Help Me!” used in the sense of asking, pleading or even praying, for help. Talk about the little things that tie the film together!

So that’s The Exorcist, It’s a horrific film, and still stands as one of the scariest of all time. It’s been banned, considered very controversial, and even has people believing in Demonic Possession.  How do you feel about the movie? Is it as scary as everyone claims? Or is it on your “Chuck-It-List” ? [a list of movies you’d never watch] Let me know down below, or over on Facebook in the comments over there!

I don’t care if that’s pea-soup.. that’s gnarly as fuck.