NOTE: As he passed away at the end of August 2015, this review is dedicated to you, Mr. [Wes] Craven. Thanks for all the Nightmares, and for creating what I consider my all time favorite horror franchise.

Something I used to hate when I was younger, that I really enjoy now is getting the chance to go to sleep. After a hard day’s work or even a day filled with nothing but movies and video games, nothing feels better then lying down and catching some down time.. That is, unless you’re being plagued by a sleep-demon who is trying to kill you in your dreams! Worse yet – if he succeeds; you die for real!

So here we go, ladies and gentlemen, assuming you haven’t caught on yet; [which if you haven’t, we need to have a discussion about your lack of horror knowledge] today’s movie is the first in a franchise that went on for seven films: [and that’s not including a mashup film and a [[terrible]] remake!] we’re talking about A Nightmare On Elm Street! 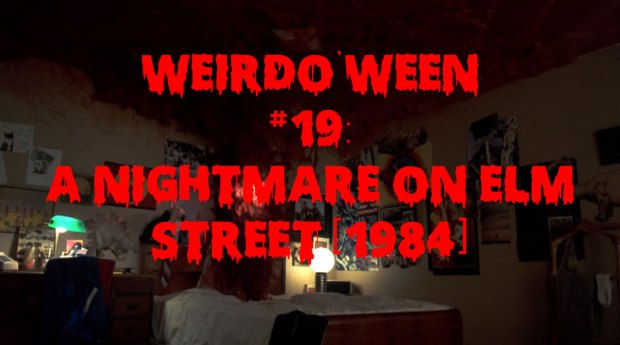 Everyone, and I mean Everyone has at least heard of our villain: Freddy Krueger. The easiest way to describe him is that he’s a psychopath who murdered several children with a custom glove fitted with straight razor blades attached to each one of the fingers. Oh, and he attacks/kills you in your dreams, all while making really amusing puns [at least I appreciate the puns] as he cackles! Here’s a lengthier explanation of just what happens in A Nightmare On Elm Street:

It all started when a judge set him free of his charges, that Krueger is burned alive in the boiler room of a school [where he worked] by the [obviously] angry group of parents whose children he terrorized! However, the actual film takes place years after his death, when the children whose parents were responsible for Krueger‘s death – including Nancy Thompson, who is the daughter of the police officer who arrested Krueger all those years ago- start experiencing terrifying nightmares involving a dirty dressed, and burnt man wearing a glove with razor blades on it’s fingers. [sound familiar yet?] As it turns out, it’s actually the ghost of Freddy Krueger haunting their dreams; and when Nancy‘s best friend Tina dies in her sleep with 4 straight cuts across her chest, Nancy realizes that she [along with the other kids] must find a way to stop the evil psychopath’s dream terrors – or risk never sleeping again…

What makes A Nightmare On Elm Street so clever is how it creates an entirely new way of representing dreams sequences on screen. In the movie, the scenes that take place during a “dream” are filmed within an airy and murky atmosphere, but the catch is; so are many of the waking scenes. This makes it very difficult to tell whether a character is awake or asleep. [which is ideal considering the plot!] While the movie never actually shows any character actually fall asleep, as a result we are constantly questioning whenever characters so much as close their eyes – even for a moment. In some of the more crucial scenes, it is impossible to tell whether what we are seeing is real or happening only in a character’s mind. But the movie ultimately suggests that the difference doesn’t matter. That, one way or another, Freddy will get you.

The actual premise of the movie, which has a child-killer haunting a group of teenagers’ dreams and has the capability of killing them while they’re asleep, ends up turning the whole “It was all just a dream” convention over on its head: according to Nightmare, the real world is safe, and the dream world is extremely dangerous. I mean, think about it: Unlike any other movie – where you can run and hide in the closet – Freddy attacks when you’re most vulnerable; when you’re sleeping.. how can you not sleep?

Director Wes Craven – RIP – understood that the anticipation of danger tends to be more frightening than the actual attack; and he shows us some great visual shots using that effect, including one where Freddy‘s arms becomes unnaturally long in an alleyway, and another where the stairs literally turn into a gooey glue-like substance, almost as a nod of the common nightmare where it is hard to get away from someone chasing you. The movie constantly finds ways to tease the audience, never resorting to a red herring, which let’s be honest: is becoming a very tired convention used in almost all other slasher films. Especially in recent horror.

A fun fact about Nightmare is that this was actually Johnny Depp‘s first role, playing the character of Glen – Heather Langenkamp‘s [Nancy] boyfriend, and although he does get a few neat lines, his personality is not overly fleshed out, and because it’s the 80s, there is no sense of the great actor Depp would go on to become in today’s age.

Ultimately though, A Nightmare on Elm Street is really all about Nancy. As fans know, the film mainly focuses on Nancy‘s troubles, mostly Nancy‘s dreams and Nancy‘s responding actions. The ending of the film becomes a bit confusing, but it’s meant to be – basically asking us to answer the question: did all this happen? Or is this yet another dream? The booby traps that Nancy sets when Freddy finally comes into the “real world” are unfortunately a bit ridiculous, and Freddy does seem kind of helpless [almost to the point of lame] chasing Nancy around her home as he’s trying catch her, and it’s something the film could have done a little better. But that’s just a tiny complaint. I can live with it! Overall, it is a great mixture of horror, thriller and fantasy. A Nightmare On Elm Street taps into two hardly recognized everyday events in human life: sleeping and dreaming, and makes them into something we can learn to fear. Craven‘s ability to realize this unknown fear in a movie is something that hadn’t been done before, and it worked perfectly. A Nightmare On Elm Street still stands as a great movie [even with it’s terrible remake – and another remake on the way] and for horror buffs it is a must-see and for those that aren’t into horror, there is still a fair amount of other things to keep one’s interest on the screen. [and I’m not just talking about Mr. Depp‘s extremely dreamy – see what I did there? – appearance]

So seriously go and watch A Nightmare On Elm Street. It’s my favorite franchise of all time, and even if the sequels did suffer from sequelitis and there was that garbage remake, they’re some of the most entertaining films you can ask for! Also, if you want me to review the second film in this franchise, let me know in a comment! If you have an idea for the next weirdo’ween review[s], please let me know which movie[s] you’d like to see next! If you found yourself to enjoy this particular review – and want to see more – then take a minute and follow me over on my Facebook page [it’s at over 120+ likes almost at 130!] By clicking that “like” button, you’ll see every post from warrenisweird the very moment it’s been posted online; as well as links to articles and pictures/videos that will not be featured here on the blog. Every “like” helps me a ton, giving me the ability to write more posts for you to read, so be sure to tell the horror enthusiast in your life to do the same, and share The Facebook Page with your family and friends! Join me tomorrow morning when I talk about weirdo’ween #20! – So STAY TUNED!