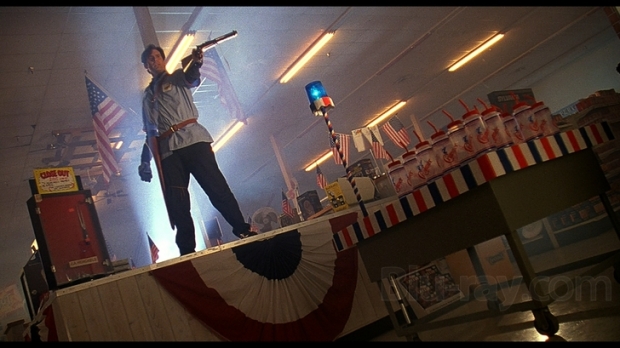 If you know me in real life or at least not on the internet, you’d know that movies like Army Of Darkness and the entire Evil Dead trilogy, are some of my favorite films of all time. It was proven when I started babbling on about how I’m currently obsessing over Ash Vs Evil Dead, which I’m strongly considering one of the greater things to come out of TV in a while. Now, the one show I haven’t really given a chance, even though I keep saying I will, is The Walking Dead. But here’s a funny thought: what do you suppose would happen if Ash were to go up against the Walkers from The Walking Dead, instead of Deadites? Plus, if this were to happen, would Rick be there to help? Or would Ash get caught doing all the work? Luckily for us, it seems we’re not the only ones who are curious about this kind of thing – as Bruce Campbell, Ash himself – ‘accidentally’ released his script of how he thinks it’d play out on Twitter. Check out the tweet below! 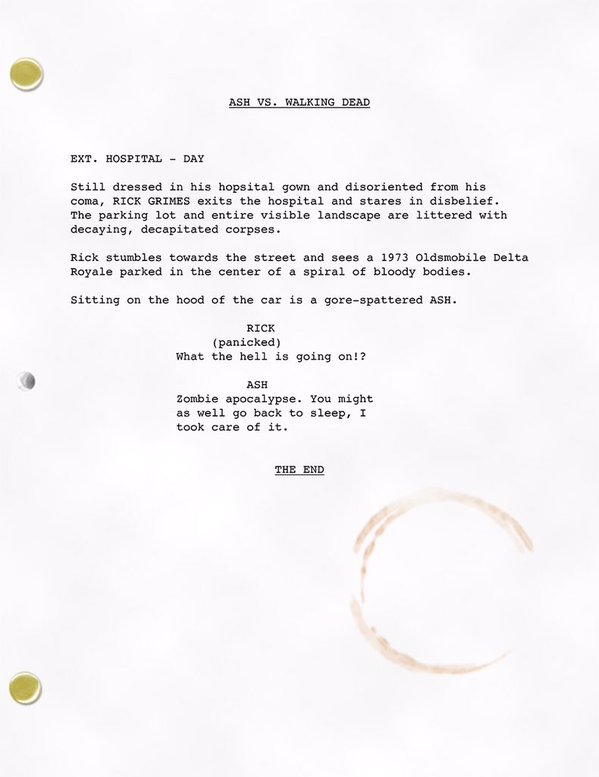 Even if you’re more of a Walking Dead than a Evil Dead fan, you have to hand it to Bruce Campbell – he’s really confident in Ash‘s abilities over Rick‘s as far as zombie slaying goes. As proven by the above tweet, this [obviously fake] screenplay takes us back to the moment Rick Grimes wakes up from the hospital [all the way back in season one!] and realizes the world has been destroyed. Only this time, things are different from the pilot episode of – Ash is waiting outside with his signature 1973 Oldsmobile Delta Royale, and in perfect fashion, seemingly takes all the credit for “taking care of the zombie apocalypse.” To add to all this, it comes off as true to Ash as a character, since we all know he probably was the one who made it all happen, again, which is how the series would continue from that point.

I love that this feels like an alternate universe, and just like “Freddy VS Jason VS Ash,” maybe we can get this in comic book form. [time to make up a petition!] I mean, I remember when F VS J VS A was going to be a movie; and when it got dropped – we got an insane comic book.. who knows? Maybe Campbell can play the cards right, and make it happen! [though, I feel like it’s unlikely..] Oh, and that coffee stain? I’m going to go out on a whim an say it’s quite an excellent homage to Sam Raimi’s other, albeit less popular, compared to Evil Dead film Darkman.

So what do you think? Would you watch an Ash VS The Walking Dead TV show? Or is it all wishful thinking on my part, because I think it’d be a blast! Maybe I’m bias though, being a fan of The Evil Dead and all. Maybe Rick is a good zombie hunter, I mean; I’ve only seen season one [I’m preparing for hate in the comments!*] On a completely separate note, I know I seem to have disappeared for this past week, only really sharing things on the Facebook page, rather than writing a new post. [I kept meaning to write something, I swear!] However, every time I got the chance, I was either too exhausted or I had something more important to do. Afterall, this is a hobby; and life comes first. Speaking of, without going too into detail, something new is in the making in my ‘real world’ life – outside of warrenisweird – which I will talk about when the time is right. So be prepared for that! I have no idea when, but hopefully soon! ANYWAY..

If you find yourself to enjoy what I do on here, then please take a minute and follow me over on my Facebook page [it’s at over 125+ likes – only a few more and we’ll have reached over 130!] By clicking that “like” button, you’ll see every post from warrenisweird the very moment it’s been posted online; and I also share links to articles and pictures/videos that will not be featured here on the blog. Every “like” helps me a ton, giving me the ability to write more posts for you to read, so be sure to tell the horror enthusiast in your life to do the same, and share The Facebook Page with your family and friends!

comeon! I know I’m not the only one who’d watch the hell out of this!