Even if I’m more into horror as a genre, one thing I used to love more than anything was anime. I still do enjoy it, but I’m very particular [whereas I used to just watch anime “just so I could say I’m watching anime”] about the series I’m watching. One series that I used to watch religiously [and still enjoy to this day] is Death Note. The series follows a young man – Light Yagami – who comes across a Shinigami’s – or “Death God” – notebook which claims that anyone who’s name is written in the book will die. Naturally, Light finds this a useful tool in his attempt to “cleanse the world” of evil, to create a “new world” where he’ll be the ruler. Light even becomes known as “Kira“, an almost hero of the people. [since he starts by only killing criminals] Of course, it isn’t that simple, as a mysterious detective known only as “L” appears, claiming to solve the mystery of who Kira is, and a dangerous cat and mouse begins between the two. It’s a really enjoyable series, both in manga and anime, which I strongly recommend if you haven’t seen. It’s not even that long either, so you could probably marathon both seasons in less than a week! [points to you, Netflix!] In fact, the exact year the anime ended, there was – not one, but three – live action movies made based on the series in Japan. While the third one, titled: Death Note: L: Change The World not being as good as the other two, it was still an interesting take on the character. Now, we’re getting a new Death Note live action movie..and it’s going to be “Americanized” – seriously. 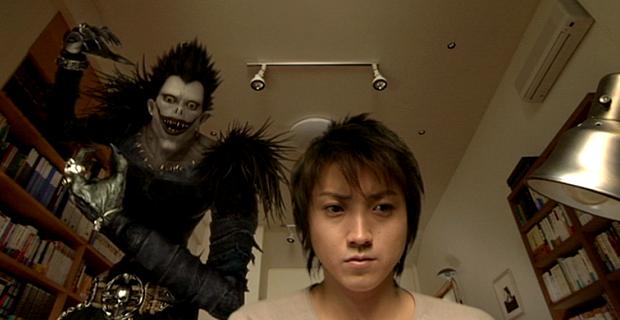 This isn’t new to anyone though, because this live action movie actually started life back in 2011, with Shane Black attached to direct. But, like with many Hollywood productions based on manga and anime properties [don’t get me started on Dragon Ball Evolution..] it landed itself in production hell, as nobody in Hollywood seems to understand Japanese pop-culture! Even as early as last year, Warner Bros picked up the production for the film but again, let the project sit. Letting it waste away. Then came both STX and Lionsgate, who are both fairly interested in making this Death Note a reality, bringing it to theaters for a large-scale audience. Unfortunately [I just really wanted to see it on the big screen] this is more than likely not going to happen.. because Netflix has now stepped up to take the helm, with production on the movie to start as early as June 2016!

It’s actually refreshing to see that Netflix has stepped in here and is actually doing something about this adaptation. This is most likely because Netflix, unlike some companies, is a very data driven company and follows what the consumers are interested in. [I mean, we got a new Pee-Wee Herman movie because of Netflix – that’s awesome!] Hollywood, on the other hand, has this big ideological disconnect with their viewers, especially when it comes to foreign property. It’s unfortunate, but true that they don’t seem to be able to successfully overcome that yet.

So while we might not have a trailer yet, and it might be strange to consider an “Americanized” Death Note film, I can safely say that I’m curious. Worried, but genuinely curious about how this movie will turn out. It’s definitely in good hands with Netflix, since they seem to know what they’re doing with big name series, and their fans love them! [they know this all too well] I’ll be sure to keep updating on here when more news, or even a trailer is released. My only concern that I can think of, is how will Ryuk look? the CGI one from the Japanese live action film was perfect, but will it be as perfect in the American one? There’s many questions left unanswered at this time, but I just need to know more!

Ryuk in the manga – Death Note

As always, now I turn to You. What are Your thoughts on an “Americanized” Death Note? Is it something you’re excited for? Or are you worried that it’ll turn out like Dragon Ball Evolution? [*shudders!] Let me know your thoughts on the matter in the comments! Once again, if you haven’t seen the Death Note anime – I strongly recommend sitting and watching the series, it’s not very long, and it is on Netflix. [No excuses!] It’s well worth your time, even if it does get kind of strange near the end! Also, if you find yourself to enjoy what I do on here, then please take a minute and follow me over on my Facebook page [it’s at over 147+ likes – only a few more and we’ll have reached over 150!] By clicking that “like” button, you’ll see every post from warrenisweird the very moment it’s been posted online; and I also share links to articles and pictures/videos that will not be featured here on the blog.

Every “like” helps me a ton, giving me the ability to write more posts for you to read, so be sure to tell the horror enthusiast in your life to do the same, and share The Facebook Page with your family and friends! I’ve also been writing way more reviews on my Letterboxd account, this is because I’m trying to review every single movie I watch  – with my most recent reviews including newer/theatrical films such as  Deadpool and The Revenant and older films, such as Nolan‘s Dark Knight trilogy. Are you interested yet? Check me out over there and click that “follow” button! I’m just bound to follow you back because I like reading other people’s thoughts on film, as well as writing reviews myself!