RETURN TO SILENT HILL! Remember a few days ago when I wrote about Silent Hill and how it was a fantastic video game to film adaptation? While I still stand by that statement, the same can’t be said about it’s sequel: Silent Hill: Revelation 3D.  I knew regardless if anyone asked for this, I’d end up writing it. Mainly because I needed to write my indefinite hatred for it. It was boring, it was bland, and it really hurt the ego of the first film. Believe it or not, this sequel jumped and is actually based on Silent Hill 3 [the game] and unfortunately for fans – like myself – it did everything wrong; both in story and “scares.” Now remember: I’m going to come off as bias because I’m talking as a fan of the first film, and this “sequel” [with the most original sequel name ever] has very little to do with the first. I mean, okay, it is set in the same place and some situations are the same but it doesn’t continue the flow that the first film had. Not to mention, it doesn’t follow any of the momentum. The first ended in a kind of bitter way that made it feel like there was no real place for a sequel – which I liked – so this whole film just comes off as a cash grab. Be warned: this review is going to widely be negative, because it’s how I felt – and if you liked this movie, then I’m sorry..but not really.

Silent Hill: Revelations 3D takes place six years after the events of the first film. Between the first and second films, Sharon‘s mother has found a way to get her out of Silent Hill because of the danger, but now Sharon and her father find themselves on the run. She also changed her name to Heather, and her father, played once again by Sean Bean, has moved her from location to location, always struggling to keep his daughter away from the Silent Hill cult. Turns out, they want Heather [or Sharon.. or whatever her name is] to complete a ritual that will set them free from the evil, and now they’ve taken Heather‘s father to ensure the girl’s return. 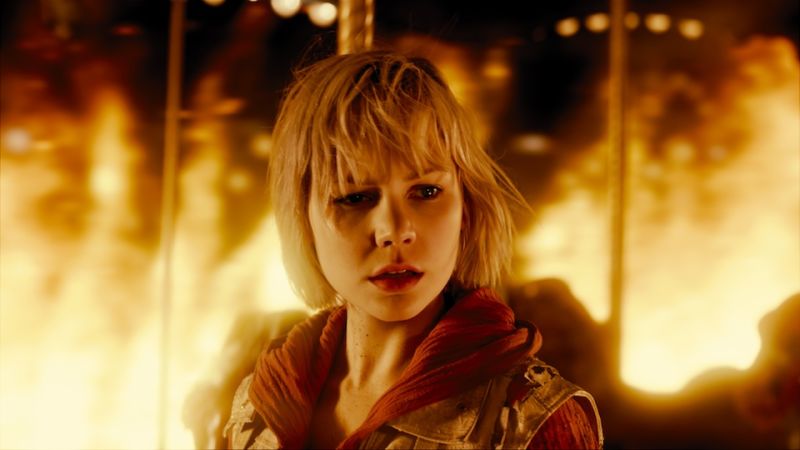 Does this sound flimsy? Good. Because it is flimsy. Unlike Ganz, Bassett‘s screenplay for this “sequel” takes its sweet time picking up any momentum. When it does, it relies on quick flashes of creepy imagery or large pieces of exposition. As it turns out, everyone – and I mean everyone – Heather comes in contact with; seems to has a vital piece of information for her. Whether it’s about the town or its residents, all this [useless] information breaks the overall pacing of the film. The first Silent Hill was over two hours long, but it was much simpler and smoother than this 95 minute “movie.” As proven in Revelations, Bassett doesn’t seem to understand the concept of explaining things, so while the story is trying to move along, the film feels the need to grind to a shrieking halt every time it decides it wants to explain something. It makes the viewer feel stupid, like every detail needs to be explained in simple terms.

[the only interesting monster in the film]

As our “story” progresses, it becomes more and more weighed down by ridiculous twists and confusing “revelations” [oh, I get it now!] About half way through the film, all hell tries to break loose, and that’s when things just start happening for no reason. But don’t worry! Bassett, always ready with his exposition, handles the confusion we just felt by having a character explain out exactly what’s going on and why. Good thing, because it’s not like I just watched the movie or anything.. ugh.

What makes the Silent Hill video games so scary is that it always seems vague enough that dropping random characters into the game’s atmosphere could always be the starting point of an interesting mystery, but in the case of a movie, it seems to be next to impossible to translate onto the screen. The one thing it should be able to do is show us how creepy, intense, and effective the first Silent Hill movie was..or at the very least, build on it! 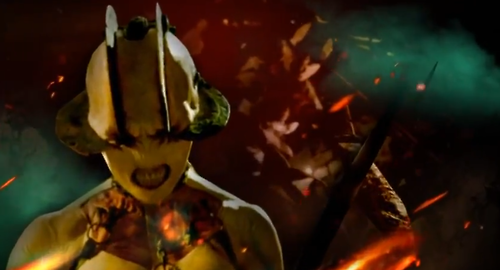 I love the Silent Hill world: the [first three] games are masterpieces in their own right, and the first movie was fantastic. This sequel on the other hand, really hurt to watch. Remember, this is just my opinion. Although I didn’t enjoy it, there are people who preferred this film over the first. I think at the rate we are going with these films, a third one would be pushing our luck.

The question remains though: what did You think of Silent Hill: Revelations? Was it a worthwhile sequel? Or an unnecessary money grab? Let me know in the comments! Also, if you find yourself to enjoy what I do on here, then please take a minute and follow me over on my Facebook page [it’s at over 149+ likes – only a few more and we’ll have reached over 150!] By clicking that “like” button, you’ll see every post from warrenisweird the very moment it’s been “gone live” online; and I also share links to articles and pictures/videos that will not be featured here on the blog! Every “like” helps me a ton, giving me the ability to write more posts for you to read, so be sure to tell the horror enthusiast in your life to do the same, and share The Facebook Page with your family and friends! I’ve also been writing way more reviews on my Letterboxd account, this is because I’m trying to review every single movie I watch  – with each review coming the very next day after viewing! Are you interested yet? Check me out over there and click that “follow” button! I’m just bound to follow you back because I like reading other people’s thoughts on film, as well as writing reviews myself!