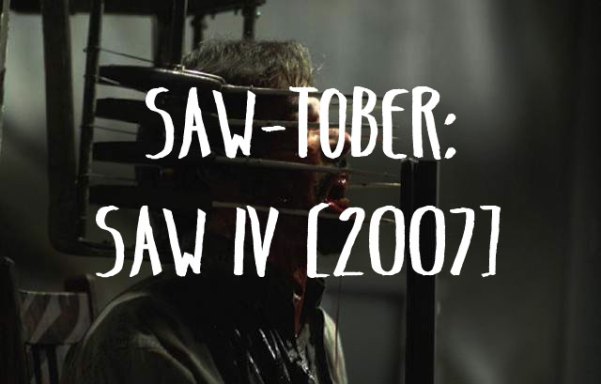 FINALLY: seeing as I am reviewing each and every SAW film in the franchise, I have been waiting to review today’s sequel: SAW IV and before you ask why, I think you already know – it is probably my favorite in the series. [At least, it is pretty close to the top of the list] Lets start with the obvious, you can expect a few things from a SAW movie: there will be blood [and gore] – and a lot of it. One thing that I have always admired about this franchise is that it definitely does not hold back on that gore factor, which is kind of nice for us horror fans who seems to be living in an era where so many horror films aim for a PG-13 rating, to gather a larger crowd. But with SAW, you can always expect indulgent traps – which usually are planned out mechanisms that are timed perfectly to deliver the final killing blow to the [poor] victim at just the right time. There is almost always those hyper-edited sequences [that I have grown to dislike] during the suspenseful moments, leading into some sort of dizzying wrap up sequence that explains all the twists and turns of the movie by replaying the last hour and a half in just under two minutes. Yet, somehow, the SAW movies are a fun form of horror entertainment. OKAY, with that said, lets get on with the actual movie review!

SAW IV opens with some coroners performing an autopsy on Jigsaw himself [remember, he did end up dying at the end of the last film] To keep you from any lingering doubt of his death, the first gory scene of the movie isn’t during a trap! It actually comes from watching Jigsaw’s skull and chest cavity being opened up in a graphic yet fairly precise sequence. [what makes this scene even cooler is the use of black and whites on his body/the table he’s on/the background, but his blood is a dark red] Eventually this autopsy leads to the beginning of the movie’s plot: a mini-cassette tape is found inside the corpse that proves that, although the killer is dead, the games are not.

This time around, the action follows [my favorite] Detective Rigg, who has survived through life as a supporting character in the previous two SAW films only to become the newest target of Jigsaw’s game himself. While Rigg is off dealing with a gambit of traps and games, two other FBI agents are on a separate course, attempting to figure out how Jigsaw could possibly be still operating; considering the fact that he currently is not alive and Amanda is also dead. The solution is simple: Jigsaw had more than one helper, which means the [other] remaining “helper” is still out there – on the loose!

Now, this installment will have standard SAW fans a little disappointed because although they are there, the traps and gore seem to take a bit of a back seat. Instead, we get storytelling and exposition. Believe it or not though, that’s what I liked about this sequel. Seriously. Instead of just laying on the traps, and a quick explanation that these traps mirror the moral shortcomings of those involved, SAW IV gives us a glimpse behind the method and madness of Jigsaw and explains how the killer was “created.” What made this so special [and important] was the fact that the story doesn’t take away the mystery of Jigsaw, but rather explains how a brilliant architect named John became the killer he is [was?], thus expanding on the mythology around Jigsaw, as a character.

These flashbacks do a brilliant job of explaining Jigsaw’s complicated past [thanks to the FBI agents who were interrogating his ex-wife Jill – she becomes important in later films!] and they intertwine nearly perfectly with Rigg’s story-line. Instead of being placed in different traps, [like Jigsaw’s usual set of victims] Rigg is shown and exposed to other victims in traps. Sometimes, he is even forced to put them in the traps after seeing the killer’s reasoning behind why he picked certain people. It’s an interesting way to give a look to the audience and the detective, although don’t get me wrong – that doesn’t make some of the traps any less disturbing. Some of the traps made me cringe, but that’s because I have this problem where I imagine myself in that situation..

If I had to point out one thing that I wasn’t too fond of, it is the way the writers feel the need to point out that Rigg is being lured into learning from Jigsaw’s mentality. I get why they said it but in this particular case, that sort of thing should have been left unsaid; yet the FBI Agents mention it as part of their investigation at nearly every damned crime scene. Again, I understand it, it just gets frustrating. On a more positive note though:

then there is my favorite part – that ending! Remember Detective Matthews from SAW II? Well, as it turns out, he is still alive [granted, only barely] and being kept on an ice block which in itself is a trap – if it melts, Matthews dies – which we cannot have happening, right? well, this happens to our fabled Detective at the end of the film [spoilers, obviously] and thus ends the life of yet another cop. The ending also reveals who the “other Jigsaw helper” is: none other than Detective Hoffman, who stands proud and tall at the end of SAW IV, knowing he is the successor of John Kramer.

As far as SAW movies go, SAW IV is probably one of the better in the series, hence why I consider it one of my favorites. Although the plot-heavy story arc might turn those who look to the franchise just for the interesting slayings away, I have always been interested by the justification given by Jigsaw and what he offers for his killing[s]. I like to believe that it’s great to see his background expanded without giving away too much about the character to a point where there’s no surprises anymore. What I personally liked about SAW IV is that now the franchise is evolving and not just giving us – the viewer – the exact same formula/movie every year..

Now I turn to You – the reader. Did You like SAW IV? Or did the storytelling get too boring for you? What other opinions do you have on the series? Let me know in a comment below, and if you enjoyed this review, and are looking for more, go and follow me over on my Facebook page! [we’re at over 150+ likes – let’s get to 200!] By clicking that “like” button, you’ll see every post from warrenisweird the very moment it’s been “gone live” online; and I also share links to articles and pictures/videos that will not be featured here on the blog. So go follow over there too!

JOIN ME TOMORROW WHEN I SEE WHAT WILL HAPPEN NEXT IN THE SAW SERIES: WITH SAW-TOBER #05: SAW V.

Every “like” helps me a ton, giving me the ability to write more posts for you to read, so be sure to tell the horror enthusiast in your life to do the same, and share The Facebook Page with your family and friends! I’ve also been writing way more reviews on my Letterboxd account, this is because I’m trying to review every single movie I watch  – with each review coming the very next day after viewing! Are you interested yet? Check me out over there and click that “follow” button! I’m just bound to follow you back because I like reading other people’s thoughts on film, as well as writing reviews myself!