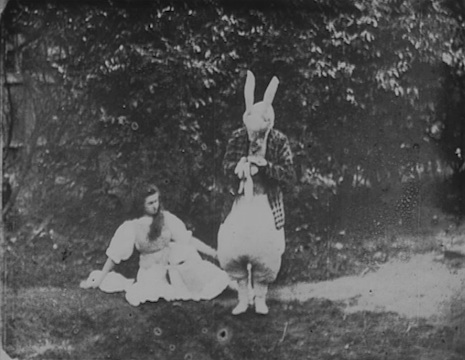 It should come as no surprise to readers of this blog that when I was growing up, Lewis Carrol‘s Alice In Wonderland was – and still continues to be to this day – my favorite fairy-tale ever written. I absolutely love Disney‘s animated film, and I even enjoyed Tim Burton‘s “version”; which, as a fan of Burton, shouldn’t be too much of a surprise. Something about the cast of characters, the colorful world it takes place in, and even the themes of Alice being “crazy all along”; these are all things that I find fascinating – there really is no story like it. But when it comes to the concept of a movie version of the familiar story, there’s been many; just look at what comes up when I type in “Alice in Wonderland” on imdb down below. 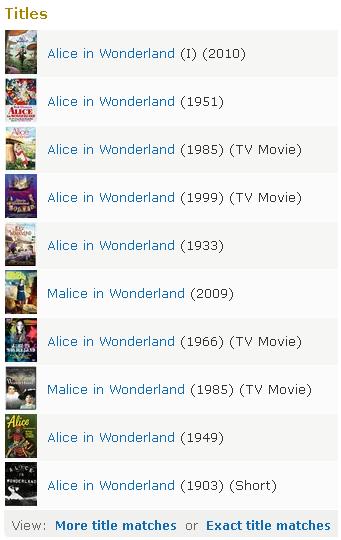 Looking at this list, there’s a total of ten films on record, [not including all the ones that come up when I click “more title matches”] and that includes two films called “Malice In Wonderland” – which, after reading the plot- doesn’t seem to be  what we’re looking for. Today though, we’re looking at the very first one, the one from 1903. [over 100 years ago!] This version involves a girl – named Alice – awakening in a garden beside a white rabbit in a waistcoat with a pocket watch..sound familiar yet? A Director by the name of Cecil Hepworth decided to make [a faithfully as possible] an adaptation of Lewis Carroll’s original story: Alice’s Adventures in Wonderland for the big screen..at least, as big as screens were in 1903! Originally running a whopping twelve minutes in length, Hepworth’s film of Alice In Wonderland was – at the time – the longest film produced in all of Britain. In order to keep faithful to the novel, the plan was to try and keep the style of the film to look like  Sir John Tenniel’s original illustrations. [which I find fascinating!] The costumes were designed from hand and elaborate sets were built at Hepworth’s film studio – including a rather impressive rabbit burrow. To save on money, which mainly went to costumes and set pieces, family members, friends and their children were used in the cast. [Hepworth even cast his wife as the White Queen] 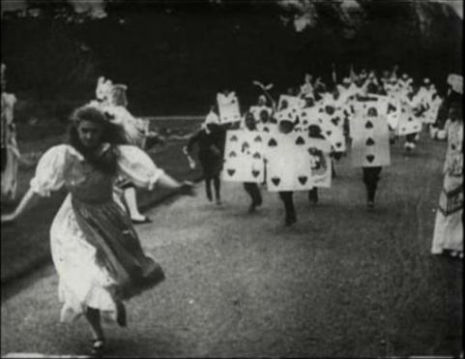 Unfortunately, being as the film is over 100 years old, the full version of Hepworth’s mini classic has been lost: the print that exists is damaged but is still a beautiful, trippy and incredible experience. However, all hope is not lost, as The British Film Institute created a remastered version in 2010. This “remastered” version is nine and a half minutes long, is a black and white silent film, and is definitely an interesting piece of cinema. Don’t be too shocked: it is still creepy in it’s own right, but it is still a landmark in film making. Even knowing that it existed so very long ago, and was able to be restored is magical. For your viewing pleasure, and my wanting to share it with the world, I’ve included the remastered Alice In Wonderland film down below.. but not before asking my usual set of questions – which can be answered after watching: What do you think about this film from 1903? Is it really interesting to know and see that the BFI remastered it for viewing in this day? Or do you think it’s too creepy, and that children would have panic attacks just watching playing cards attack a young girl? Let me know in the comments! Do you have any theories behind Alice In Wonderland? What do you think is truly happening to our Alice? Share your theories below! But enough questions. Without further stalling, here’s the VERY FIRST film take on Alice In Wonderland. [Coming to you from the year 1903]

[a special thanks to the BFI for restoring the film!]