Here we are: our final trip into the swamp to put an end to Victor Crowley – even if we haven’t had much luck the past two films! [if you missed part 1 or part 2, be sure to check them out as well!]

Although this final Hatchet film isn’t Directed by Adam Green, he actually had complete control over the project, plus the new Director; B J McDonnell, was handpicked by Green – and He did a fantastic job! So for today’s weirdo’ween post, we visit Honey Island Swamp one last time, and we’re going to finish Crowley off. for good. 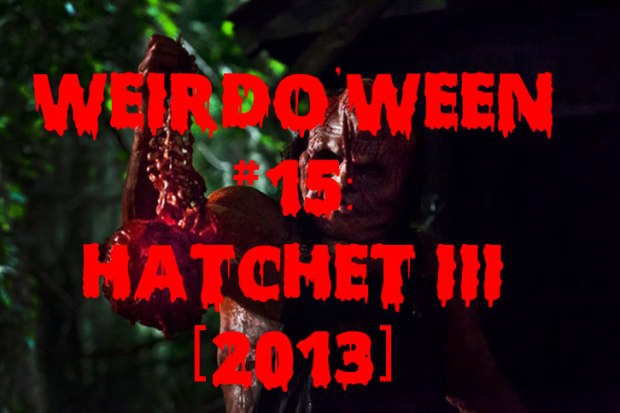 Now the important thing to note about this film is that unlike the other Hatchet films, this one took away a lot of the comedy aspects. Don’t get me wrong, there are in movie jokes, but it’s become a full fledged horror film this time around, and it’s great!

Picking up from where Hatchet II left off, Marybeth Dunston [still played by the wonderful Danielle Harris] blows off the head of Victor Crowley with a shotgun. Repeatedly. She walks away and comes across the bodies of almost everyone from the previous film, when she hears Crowley, deep in the woods. Marybeth starts up a nearby chainsaw, but is grabbed by Victor. [poor girl can’t catch a break!] Marybeth then kicks him, and as he falls backwards onto the chainsaw, he is then cut him straight down the middle of his torso. She grabs a shotgun from one of the dead men nearby, and shoots Victor‘s head, and walks back into the city’s sheriff’s station, carrying only his scalp. Sheesh. What an opening!

Of course, when Marybeth arrives and explains what just happened, no one believes her and they place her in a cell for the murders. After some discussion, and a hearty explanation in full, finally convinces the Deputies, The Sheriff, [played by Zach Galligan] paramedics, [but, why paramedics? are they going to revive a decapitated person?] and an entire SWAT team go to the swamp, only to find countless bodies and body parts. Working as a team, they start dragging body bags onto their boat.

even covered in Crowley blood, I love me some Danielle Harris

Meanwhile, an annoying reporter who has been listening to the police frequency shows up at the station, and demands to speak to Marybeth. As it turns out, this reporter is the ex-wife of the Sheriff and she manages to manipulate one of the deputies into doing whatever she wants. She comes bearing bad news – Crowley can’t be killed. She explains that he will always return because he’s on a mission – and Marybeth is the solution: Being as she’s the last of the Dunston family, Victor needs to be put at rest. The reporter then convinces one of the security guards to let Marybeth out, and the two go on a trip to find Crowley‘s father’s ashes, which will help put him at ease.

Crowley, of course, has resurfaced and is killing any all law enforcement he can find..in the goriest ways possible. Once again, like the other two Hatchet films, the kills are unique; and gorier than the last two films combined! As expected, the Hatchet franchise has been something of a roller-coaster ride, either lots of fun, or enough to satisfy the horror fans. I for one, love these films; all the films run at around a eighty minutes, give or take, and they all feature enough gore and insanity to impress even the hardened of horror fan. With this third installment, Green has reconnected with his footing, which is a great mix of gratuitous gore and stable story telling; and, not to mention, terrific performances by the likes of people we’ve come to know in the horror genre. People like Derek Mears and Sid Haig! [who gives probably the best performance since Rob Zombie‘s The Devil’s Rejects]

So check out Hatchet III, but do so by picking up the Dark Sky‘s Blu-ray version.. This one comes with two different commentaries that are informative not only on this film but on the horror genre in general. It has some excellent behind-the-scenes footage of how Kane‘s makeup is applied and how terrible mosquitoes really are in the Louisiana swamps, where the film was made/filmed. It’s a truly a must-own disc for the Hatchet fans.

And thus ends the Hatchet trilogy review[s]. Which film was your favorite? Was it the original Hatchet film that came out in 2006? or was it the final one, Hatchet III, that ended the series? Let me know in a comment or two! Also, keep an eye open for a cameo from a familiar face from [the first] Hatchet in this finale film! Fans will greatly appreciate! However, with this being the final Hatchet film, the next review [tomorrow’s] will be something completely unrelated to this series; which leads me to my next question:

If you have an idea for the next weirdo’ween review[s] please let me know which movie[s] you’d like to see next! If you found yourself to enjoy this particular review – and want to see more – then take a minute and follow me over on my Facebook page [it’s at over 120+ likes almost at 130!] By clicking that “like” button, you’ll see every post from warrenisweird the very moment it’s been posted online; as well as links to articles and pictures/videos that will not be featured here on the blog. Every “like” helps me a ton, giving me the ability to write more posts for you to read, so be sure to tell the horror enthusiast in your life to do the same, and share The Facebook Page with your family and friends! Join me tomorrow morning when I talk about weirdo’ween #16! – STAY TUNED!