Awhile ago, I talked about a movie – which shouldn’t surprise you – a movie that I considered the most unsettling film I’ve seen in a long time. [read that article here] Obviously, I’m talking about David Robert Mitchell‘s latest and greatest: It Follows. The film was boasted about for months on end, so when I finally saw it – I was super excited to know that everything positive I had heard about it, was all true. Hopefully you’ve taken the opportunity to see the film, but if not, don’t worry; I’ve tried to avoid anything too “spoilery” – but I will say that this would make a lot more sense if you’ve actually seen the film..

ONE – The theater from the film [above] is actually the same one where The Evil Dead had it’s original premiere back in 1981:

Early in the movie, Jay and Hugh go to a theater to see a live performance. Strangely enough, the one used is an actual theater known as The Redford Theatre, which can be found in Detroit. If that’s not interesting enough, it’s also where Sam Raimi premiered The Evil Dead in 1981! According to Bruce Campbell, he had attended the theater quite often [as a child] with his parents.. 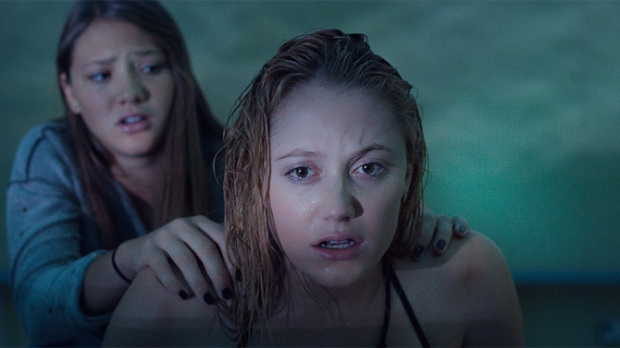 though it’s not specifically mentioned in film, we come to learn “the villain” is an STD [STI ?] , but according to the writer/director, it had a fairly bland name – known as The It. In an interview, David Robert Mitchell was even asked if it had a “special name” which he replied with: “We just called it The It when we were labeling it. So we’d just talk about, say, The It on the roof. And then I’d just describe the appearance, whatever it was.” 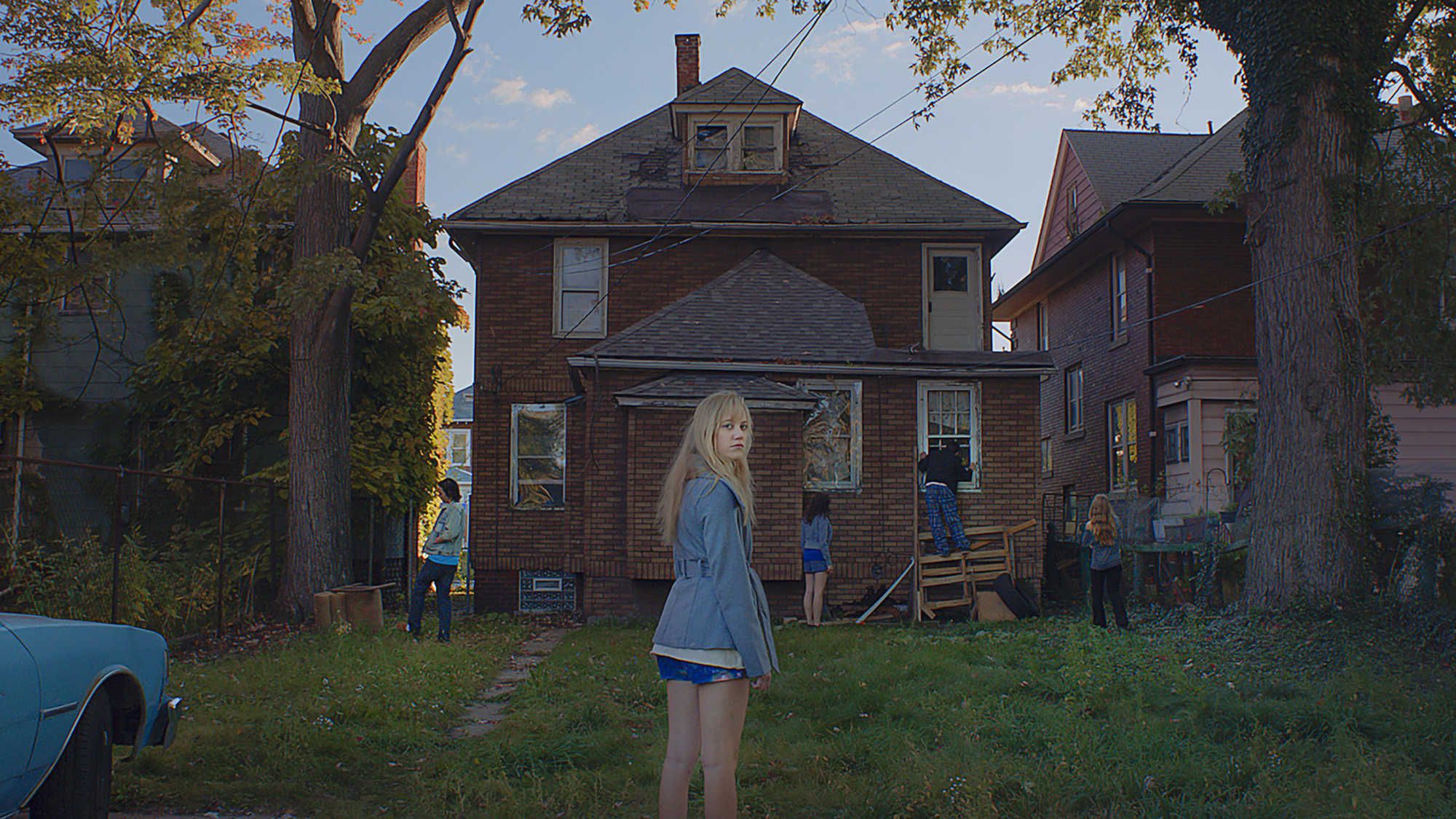 THREE – The rules that were laid out in the film may not be the actual rules:

Keeping up with It; there’s one point in the movie, where there are rules talked about how the teens think The It operates. The thing is though, they may not be as accurate as we’re led to believe. In yet another interview, Mitchell explains that, “The only rules that we hear are rules that we’re told by a character within the film; who has access to limited information. If you were to look at the film enough, you can begin to understand how he may be figuring these things out and how he has gotten the information that he has. But you also have to understand that they’re not rules on a stone’s tablet; they’re a character’s best guess about what’s happening to them. So, you know, they seem mostly right. But for me, that’s kind of fun, in that there might be some gaps in information, some things that he doesn’t understand and neither do we.”

I know, I know: I’m disappointed too. But Yara [arguably the most pointless character in this movie] has this nifty little e-reader/cell phone in the shape of a shell. [as seen above] But the really disappointing part is finding out that the thing doesn’t actually exist. During the same interview mentioned in point three, Mitchell was continuously asked where someone could get their hands on one; which he replied with the sea shell smartphone/e-reader being made up for the movie to keep things feeling “like a dream or something outside of time”. He also claimed that having specific devices in a film like this one can make a film feel dated, so it was fun to “make a device up”.

So to recap what I’ve said before; It Follows was, and is, a fucking great film. it’s not scary in the gore-soaked sense – which most horrors try to be – but more unsettling. It’s got terrific acting, the atmosphere just grabs you from start to end, and that music; ohgodthatmusic. The music alone is so good, I recommend this as your next early birthday gift to yourself – assuming you can get a copy! [it’s only been sold out for forever]

On an ending note, if you found yourself to enjoy this piece, please take a minute and follow me over on Facebook where you can click the “like” button on my Facebook page. By clicking “like”, you’ll see every post from warrenisweird the very moment it’s been posted. I also share things that will not be featured here on the blog.  So be sure to tell the horror enthusiast in your life to do the same, and share the page with family and friends!

I didn’t know anything about this film when it was first announced – I knew it by title, and I had even seen the first trailer.. But ultimately, it told me nothing, and raised a few questions: what was It? why was It Follow-ing that girl? It told me zero about the film; which got my attention more. After working every time I planned to see it, to not being able to find it in a theater nearby [had to take a bus 45 minutes, nearing the highway exit to Montreal] – a friend and I finally went and saw the suspenseful masterpiece known as It Follows.

It Follows comes off as an obvious nod to late 70s to early 80s movies, and it is insanely well done. It’s cinematography could be considered masterful, the plot is brilliant, the FANTASTIC music that sounds like it’s out of Suspiria , [oh god, that music though: it’s perfect] and even the fact that it’s actors were people that I didn’t recognize – It’s all something I really enjoyed.. as in it really well thought out before bringing the film to the screens! The film was eerie, suspenseful, and best of all – real.

Our story begins with a [fairly attractive] girl by the name of Jay. It’s the beginning of fall; [early October, I’d say] so you’d think life should be about going school, meeting boys and weekends out with friends.. But, after a somewhat innocent sexual encounter with her older boyfriend, she finds herself haunted by strange visions and the dreadful sense that someone, or possibly something, [it] follows her everywhere she goes: and follows her it does..

While it felt somewhat obvious that the “big bad” in this film was an STD, [STI ?] and David Robert Mitchell, the director/writer, did an amazing job at keeping this “villain” hidden in plain sight. At times, the camera wouldn’t even be focused on two characters talking, but to an unknown individual in the background – it’s subtlety, and it’s key in this film. It’s like Hugh [the asshole boyfriend who “passes” the evil along to Jay in the movie] said: “It could look like someone you know or it could be a stranger in a crowd. Whatever helps it get close to you.” We’re quite literally told what “it” is, but through common knowledge, not through the movie: and I like that; subtlety. I could have gone into how she tries to pass it on to others [who end up dead afterwards] and how her sister and her friends try to help her come to terms with everything by “fighting the villain” but that’s something you’d have to see the movie for; it’s important, don’t get me wrong, but that’s not really the point I wanted to bring across in this post..

The other cool thing about It Follows is that for a film that was done so well,  it surprisingly it only had a two million dollar budget, which for films these days, that’s nothing. It Follows is absolutely nuts and deserves the praise I read all over the internet beforehand. It’s not so much horror – since I wouldn’t say it’s scary – but it’s more more suspense, and unsettling very unsettling: with every camera shot, every view from Jay, watching this film makes you feel involved – like no matter what you do, no matter what happens: you’re trapped in this world of evil. It ends on kind of  a cliffhanger; showing that for all we know – the evil hasn’t left. and that realistically- knowing what the evil is- it never really will.. Of course, this helps make it feel depressingly real. But you know what? I liked that fact. I like that it may be “okay” for Jay, coming to terms with it by the end of the film- but that doesn’t mean that this “villain” doesn’t exist elsewhere.. It Follows is getting a sequel, I know that much for sure: whether or not it’ll play out the same, or if it’s following someone new; is left to the writer. In short, watch this movie – watch it and feel unsettled..feel what Jay felt – and be in agony afterwards. Be advised though, this is not a feel good movie.

This is what a suspense film should feel like.

if you found yourself to enjoy this piece, please take a minute and follow me over on Facebook where you can click the “like” button on my Facebook page. By clicking “like”, you’ll see every post from warrenisweird the very moment it’s been posted. I also share things that will not be featured here on the blog.  So be sure to tell the horror enthusiast in your life to do the same, and share the page with family and friends!