Ever since it was announced, I’ve been finding myself concerned for MTV‘s Scream: The TV Series. It may be because of my in depth review of the first film though, considering I called Scream one of the most important horror films of it’s time – if not all time! It’s not so much the series as a whole I’m worried about, but rather how is it going to translate from big budget film[s] to television? I’m not quite sure what kind of show MTV plans to deliver, but with the first episode releasing on June 30th, 2015; I’m becoming more and more curious as to how this show will all play out. As we learned in the Scream films, Everyone has secrets. Everyone tells lies. Everyone is fair game. And everybody dies – and this show seems no different, boasting murders at parties, and everyone being on the floor: either with slit necks, or knives in their heads! The odd thing about MTV producing this show is that Scream [the original film] was actually the winner of the 1997 MTV Movie Award for Best Picture. Another interesting thing to note about this new version of the series is that it doesn’t take place in the same town as the films, but rather a smaller town known as Lakewood. For those unfamiliar with Scream: The TV Series, I’ve included the synopsis below:

“After a cyber-bullying incident results in a brutal murder, the shocking violence stirs up memories of a  killing spree from the past that has haunted some, intrigued others and maybe just inspired a new killer. A group of teens – with two old friends struggling to reconnect at its heart – become lovers, enemies, suspects, targets and victims of a killer who’s out for blood.” 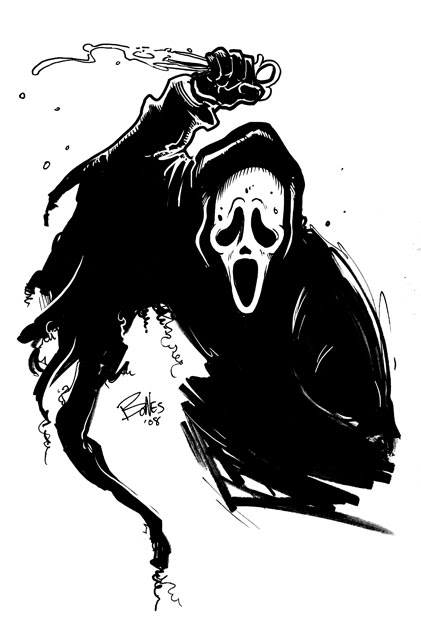 I love Ghostface just as much as everyone, but apparently the signature mask will NOT be appearing in the show…

Since we still have a month and a bit before it’s release, I find myself with a few questions involving the show: with the most important being: will the “rules” apply? Or will the series be, or feel, as comedic as the films felt at times? It’s something we will have to wait til the end of June to find out with ten episodes being made for season one. The show will be written by Jill Blotevogel, [who wrote a few episodes of 2002’s The Twilight Zone]  and will have Canadian Director Jamie Travis on board as well. This series was originally planned to be released in mid-2014, however, this was changed to Summer 2015 with the pilot episode being called “Red Roses”.

Now the question is, are you excited for Scream: The TV Series? If you’re still not entirely sure how to feel about all this; check out the newest promo for the show, entitled: “Killer Party” below – it’s bloody, it’s vicious, and it looks [half-] decent so far. Let me know your thoughts about it in a comment or two! Also, if you found yourself to enjoy this piece, please take a minute and follow me over on Facebook where you can click the “like” button on my Facebook page. By clicking “like”, you’ll see every post from warrenisweird the very moment it’s been posted. I also share links and pictures that will not be featured here on the blog.  So be sure to tell the horror enthusiast in your life to do the same, and share the page with family and friends!!