From working a ton, to visiting friends [this guy, and this guy] and family [out of town, which is why I’ve only been posting on the Facebook page, rather than here lately] – I’ve been a fairly busy guy this past week. But when I got home Monday night, I didn’t want to jump on the computer and type away, so I decided to take a blast to the past and play Pokémon Heart Gold on the 3DS; which I got as a gift from one of the above said friends.I completely forgot how much I love the games [I grew up playing Pokémon Blue and Red] with the cute characters, the battling mechanics, and most of all – the “gotta catch ’em all” feelings you get when you throw that famous Pokéball : it’s all around good natured, child-friendly fun.. Or is it?

Let’s quickly recap, in case you have been living under a rock for the past 15+ years or you haven’t played the games, Pokémon is a long running video game series where your objective is to collectively ‘catch’ over 600 creatures and make them battle each other to level up and “evolve” them to stronger monsters. If you’re against the whole animal cruelty thing, you can alternatively have them participate in contests, judging their beauty with different accessories on them, and so forth. I guess it’s also fair to mention that in the game, you leave home at the age of ten to find and “train” these wild monsters..

[relevant to this blog’s Pokédex]

Now the reason this post is titled “secretly terrifying” is because although it’s marketed to [ten + year old] kids, many of the Pokédex – an electronic ingame Pokémon encyclopedia – entries are creepy as fuck.. like morbidly creepy. It makes you wonder how some of these slipped past game-censors, and how parents would feel if they knew what little Tommy was playing with..To make this list easier, I have included a picture of the “creepy Pokémon“, and added it’s Pokédex entry [also stating which game the entry is from]. So grab your Pokédexes, and let’s have some nostalgic fun, shall we?

Pokédex Entry: It happened one morning – a boy with extrasensory powers awoke in bed had transformed into Kadabra. [as per Pokémon Fire Red]

Starting off with one of the more what the fuck moments in the very first Generation of the series, Kadabra is already kinda spooky looking. But to know that this “pocket monster” was once human makes it downright terrifying! If that’s not enough, Kadabra has a similar look and feel to Baphomet – the Freemason’s god. In all seriousness though, this basically tells us that trainers who have one of these, are “training” a child..to battle monsters..to the death. yup.

Pokédex Entry: Each of them carries a mask that used to be it’s face when it was human. Sometimes, they look at it and cry. [as per Pokémon Black]

Based on this particular entry, we’re introduced to a pretty deep – yet messed up concept as if it was completely normal. According to this, humans [and trainers alike] can die and ultimately turn into Yamasks. If that’s not bad enough, it basically gets humiliated by losing it’s entirety of its human body except the fucking face: WHICH IT THEN CARRIES AROUND AS A MASK!!

Pokédex Entry: It’s tongue is made of gas. If licked, it’s victim starts shaking constantly until death eventually comes.. [as per Pokémon Silver]

It’s one thing that Haunter‘s tongue is made of gas, I mean it is a ghost – but to know even the slightest of touch will kill it’s enemy? that’s dark..even for what we’ve seen already. The above entry doesn’t even try and deny that fainting is just a term used for death in the Pokémon world! The scariest part of this creature is that if you remember the TV show, during the opening theme, Haunter actually licks Ash‘s Charmander: what does that tell us? the shaking is clearly visible..[check it out here]

Pokédex Entry: Darumaka’s droppings are so hot, people used to put them in their clothing to keep themselves warm.. [as per Pokémon White]

Although cute, Darumaka is a strange creature; even by Pokémon standards. In a world where all of society seems to only care about pocket creatures that are constantly beating each other up – which seems to be the norm amongst kids – the concept that people are putting scalding hot monster feces in their pockets to “keep warm” is probably the most fucked-up thing on this list – and that’s passing the fact that some Pokémon hold their dead face around. 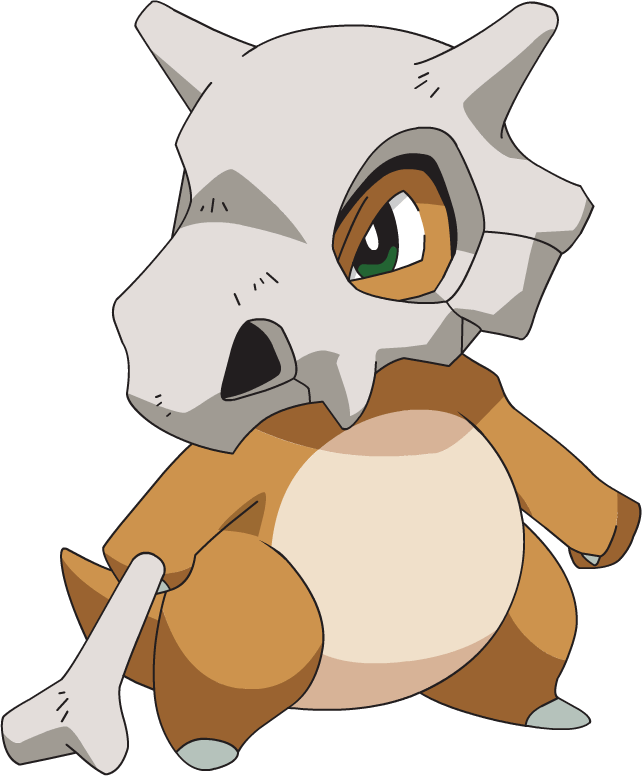 Pokédex Entry: It always wears the skull of it’s dead Mother, no one has any idea what it’s hidden face looks like. [as per Pokémon Silver]

Hard to believe that as a kid, Cubone was actually my favorite Pokémon, I loved it’s design, it’s move set and even it’s evolve form [Marowak, which has the deceased Mother’s skull fused to it’s face] it blew my mind as I grew older to know that it’s skull mask isn’t a “mask”.. This Pokémon is more depressing than any, and I still love Cubone.

Obviously, there’s more than just these five Pokémon that can be classified as “terrifying”. There’s many psychic types that even go so far as to kidnap kids, or even eat their dreams! And that only marks seven total – out of over 600! But now I ask you: which creepy critter is your favorite? Did it make this list? Let me know in a comment or two! Also, if you found yourself to enjoy this piece, please take a minute and follow me over on Facebook where you can click the “like” button on my Facebook page. By clicking “like”, you’ll see every post from warrenisweird the very moment it’s been posted. I also share things that will not be featured here on the blog.  So be sure to tell the horror enthusiast in your life to do the same, and share the page with family and friends! The page only needs FIVE more “likes” until we’re at the 100 mark! [there will be a celebratory post when it’s reached!]

When you think of the term “video game”, what’s the first thing that comes to mind? Call Of Duty? QBert? [points to you if you know QBert] For most of us, gaming didn’t really become a thing until the NES, or better known as Nintendo Entertainment System. One of my fondest gaming memories is playing Super Mario Brothers on the NES with my cousin and my sister, it was a great way to escape the harsh realities of being a kid; with such struggles like homework, life at home, or [in my case] dealing with bullies. It was through the Mario Brothers that made me feel like I was invincible [and not just because of the Star ingame]

As I grew older, so did my gaming consoles — I eventually began ‘evolving’ as a gamer. These gaming systems became [and still are to this date] something special to me, helping me delve deeper into a world that makes you feel special, or important. Video games for me only really started taking ahold of me in grade 4 – which was when I got my Nintendo 64. Look in the collage above, do you see it? here let me make it easier for you: [read on!] It was the first time I was introduced to the game series/franchise which still remains my favorite of all time: The Legend Of Zelda. I started with Ocarina Of Time – which may explain my strong love for it – and I have been moving forward with the series ever since.

Ocarina Of Time was the first game ever to make me feel important as a non-existent character, I’m not just 8-bit Mario jumping on turtle shells; I’m actually on an adventure – defeating huge scale bosses/enemies – to stop an evil demon king from trying to take over the land!

As I mentioned before, I used to see gaming as an escape from everyday life – bullies used to push me around at school. a lot. but as soon as I got home, I was ‘the Chosen one’ who was destined to save the world! although I feared for school the next day, I was excited as heck to get back home to my room and ‘become’ my favorite video game character. Now a days, I’m an adult – last I checked – but I still play video games. Although I usually play more ‘mature’ games such as Wolfenstein or Splatterhouse, [I’m talking about the remake on the Xbox360] I will always have a soft spot for the Zelda series.

In the end, it really shouldn’t matter what games you play, or what kind of gamer you are: as long as you’re happy playing it, fuck everyone else’s opinion. I just wish someone told me that as a kid – and if someone did tell me that – I wish I would have listened. You can have the ‘best console’ with ‘the best graphics’ but nothing will compare to the classics of yesteryear, like Mario, QBert, or Legend Of Zelda. just think, all these feelings I have about video gaming started with two little Italian Plumbers: Mario and his brother Luigi.

join me tomorrow when I write a top 5 list I’ve been dreading since I started watching horror films: “warrenisweird’s top 5 clowns in horror films”. I don’t know why I do these things to myself – is it the thrill of fear? I don’t even know..