One of the perks about writing about horror films is that occasionally, film makers will send me copies of their film to review – it’s not a paid gig, and I don’t expect it to be: I do it for the sheer entertainment of it. Whether it’s horror or otherwise, I’m always up for watching something to help someone get noticed in the film industry. It’s generally by email [where I get contacted through my contact page] and I’m asked if I’m willing to do a review, which I’m not one to turn down. It’s kind of like when I wrote the last film study, I was requested to write my thoughts on the info-graph and without hesitation, [because I thought it was interesting] I jumped at the opportunity. Same goes for movies, I’m not against reviewing every film I can, it’s just a matter of if I can get to each [and every] one of them, and having time.

One such movie I was asked if I was willing to review was called The Sky Has Fallen, and the request to review was coming straight from the director/writer. I had never heard of such a film, but armed with the knowledge that it won “Best Horror Feature” at the Horror Freak Show Festival in 2009, and that the director insisted on only using practical effects; I was sold already. I looked into it a little, [not the trailer though, I wanted to go into the film blind] and found out it started out on Kickstarter, and already had a ton of people praising either the film, or the fact that Mr. Roos [the writer/director] was using practical effects, which one fan even called “a dying art” – which I must agree with. Roos also seemed to be a reader of warrenisweird, because he had mentioned in his email that he had read my thoughts on [bad] CGI, and even agreed with me! I was beyond excited for this film. With this excitement [and free time] ahead of me: I dove into the horror award winner, known only to me as: The Sky Has Fallen. 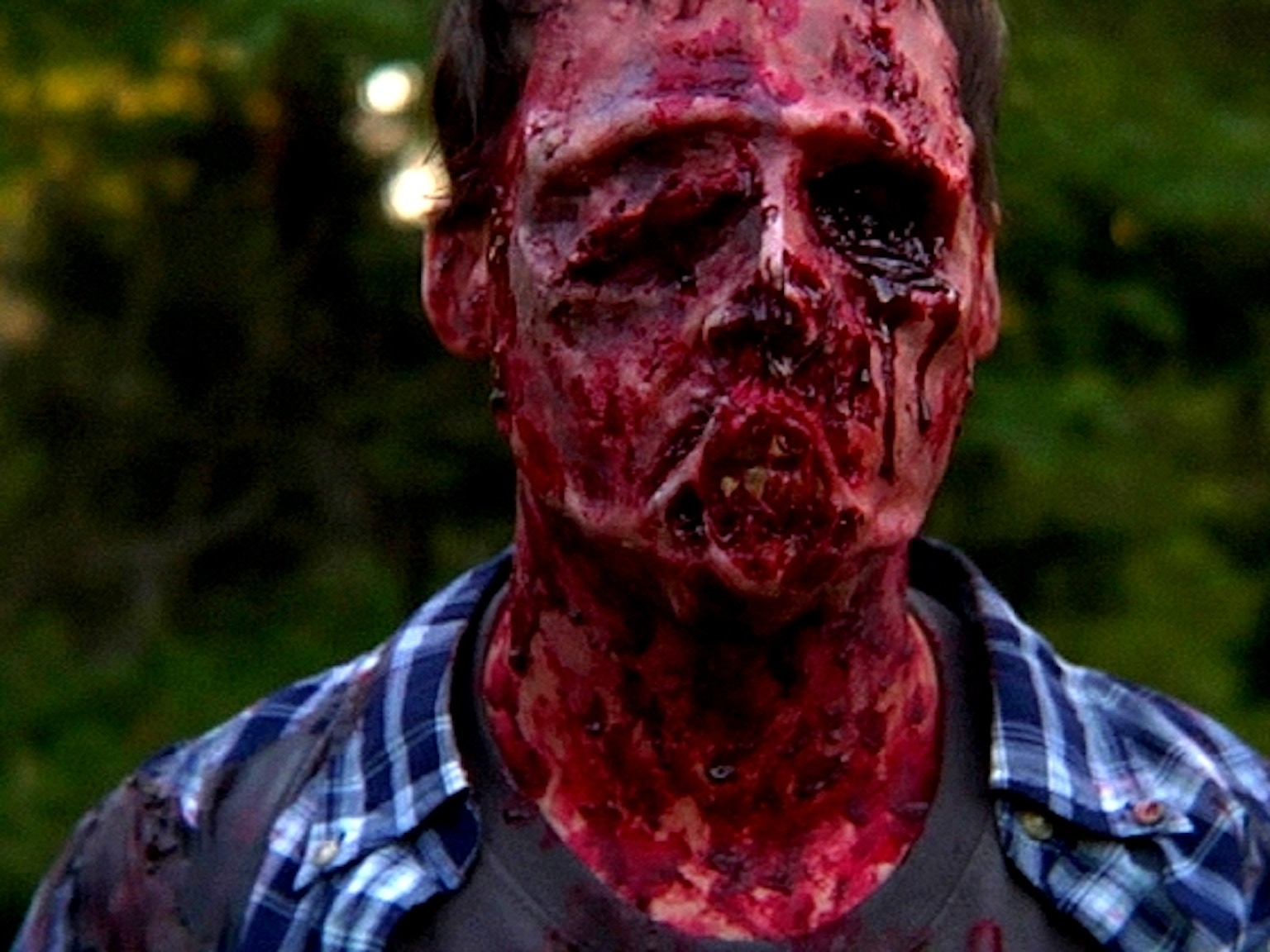 for an indie film – these effects are flawless.

The movie begins with telling us that the world has [more or less] ended, and that within a couple of hours, a new disease has wiped nearly the entirety of humankind. Trying to avoid this “infection”, people have started to evacuate cities, fleeing to remote locations such as back woods, or by the river. Some survivors have also claimed that they have been seeing mysterious black figures carrying away the dead and actually experimenting on them. Now, our two “heroes”: Lance and Rachel, are determined to fight back and plan on killing The Leader of these creatures before the rest of humanity disappears: for good. As you can tell from the above picture, the practical effects I was told about are beyond what I expected; with an almost Sam Raimi feeling attached to them. This is a great thing, as I’m a huge fan of the original Evil Dead trilogy, and Raimi is a practical effects master! [as far as I’m concerned] I would have loved to see more of the make up effects though, because as the creatures show up, you could tell that there was great effort put into the detail, but as soon as you want to get a clear look, the camera either looks away, or pans to another scene. If I had to make a constructive criticism on one thing though, it’d be that the back woods they were walking through could have used more scenery. By this, I just mean that most – if not all – the film takes place with just trees as background. If we saw maybe some survivor huts, or some sort of structures to add more to the feeling of moving forward; giving the characters a feeling of traveling further into the woodlands.

The other thing is the acting. Overall, it’s mediocre at best, but as a lower budget flick; I’m not overly surprised. The dialogue, however, is where I have a slight complaint. It’s just how the actors deliver their lines: they’re almost over-dramatic bursts.. This can be overlooked thanks to the special effects and the story, but it’s something that sometimes feels out of place at times. My absolute favorite thing about this film [besides the use of practical effects] is that the story was not fully explained. Although that can sometimes be a downfall – especially in the horror genre – I like that other than talk of: a plague, some zombie-like beings, horrible and violent deaths, and something weird happening to humanity. That’s really the only explanation we’re given. It’s strange and obscure, but we never really know what’s actually going on or even why these two “heroes” were immune to.. whatever this virus really is: It’s subtlety at it’s finest.

Ultimately thought, in an age films are filled with CGI – which I absolutely detest –  it’s so freeing to see that practical effects are still something people play with. It’s something we need more of, even if CGI can fix what practicality can’t, it’s the effort and the time that’s put into it that makes it feel so special. The Sky Has Fallen isn’t the most perfect film I’ve ever seen – but it’s great to look at visually, and for a low budget film; it’s brilliantly put together. It’s a great first [full length] film from Director Doug Roos, and I look forward to his next film[s] ! If you like zombies, swordplay, and violence – check out The Sky Has Fallen over here: it’s not free to watch, but it’s definitely a fun film to spend an hour and a bit on. Definitely Recommended.

If you found yourself to enjoy this review, please take a minute and follow me over on Facebook where you can click the “like” button on my Facebook page. By clicking “like”, you’ll see every post from warrenisweird the very moment it’s been posted. I also share links and pictures that will not be featured here on the blog. Every “like” helps a ton, so be sure to tell the horror enthusiast in your life to do the same, and share the page with family and friends!